The Vikings Defense is Back with a Vengeance

The 2020 season was a nightmare for the Minnesota Vikings defense. From injuries to rookie starters to miscommunications, their defense was a horrid mess. For a defensive-minded head coach such as Mike Zimmer, this performance was embarrassing. However, through this offseason, the Vikings have made sure that this atrocity would not happen again. While they focused on the offense in the draft, their free agency signings have focused on the defensive side of the ball. This influx of veteran talent has now addressed most of the problems that this defense had and should allow Zimmer to have the defense back to its former glory.

From his hiring as the head coach in 2014, Zimmer created the identity of the Vikings around their defense. He took over from a defense that had finished last in the league in 2013, giving up 30 points per game. By 2015 they were one of the best in the league, and it remained that way until 2020. 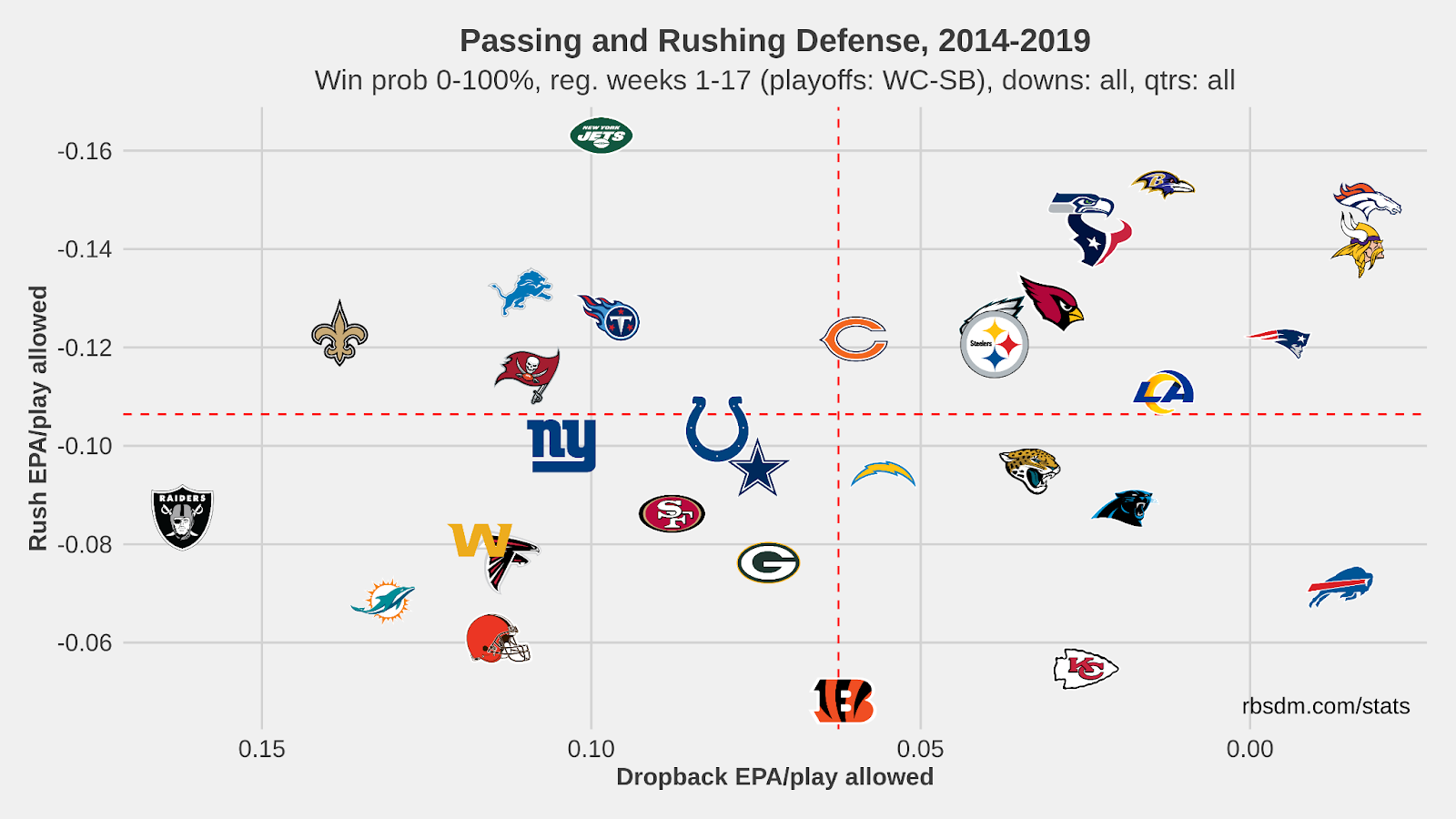 Per rbsdm.com, from 2014-2019, including the playoffs, the Vikings defense was second in the league behind the Broncos in total EPA/play, at -0.064. They were second against the pass and sixth against the run. If you take out the 2014 season, where the defense was still rebuilding from that 2013 season, it’s even clearer. 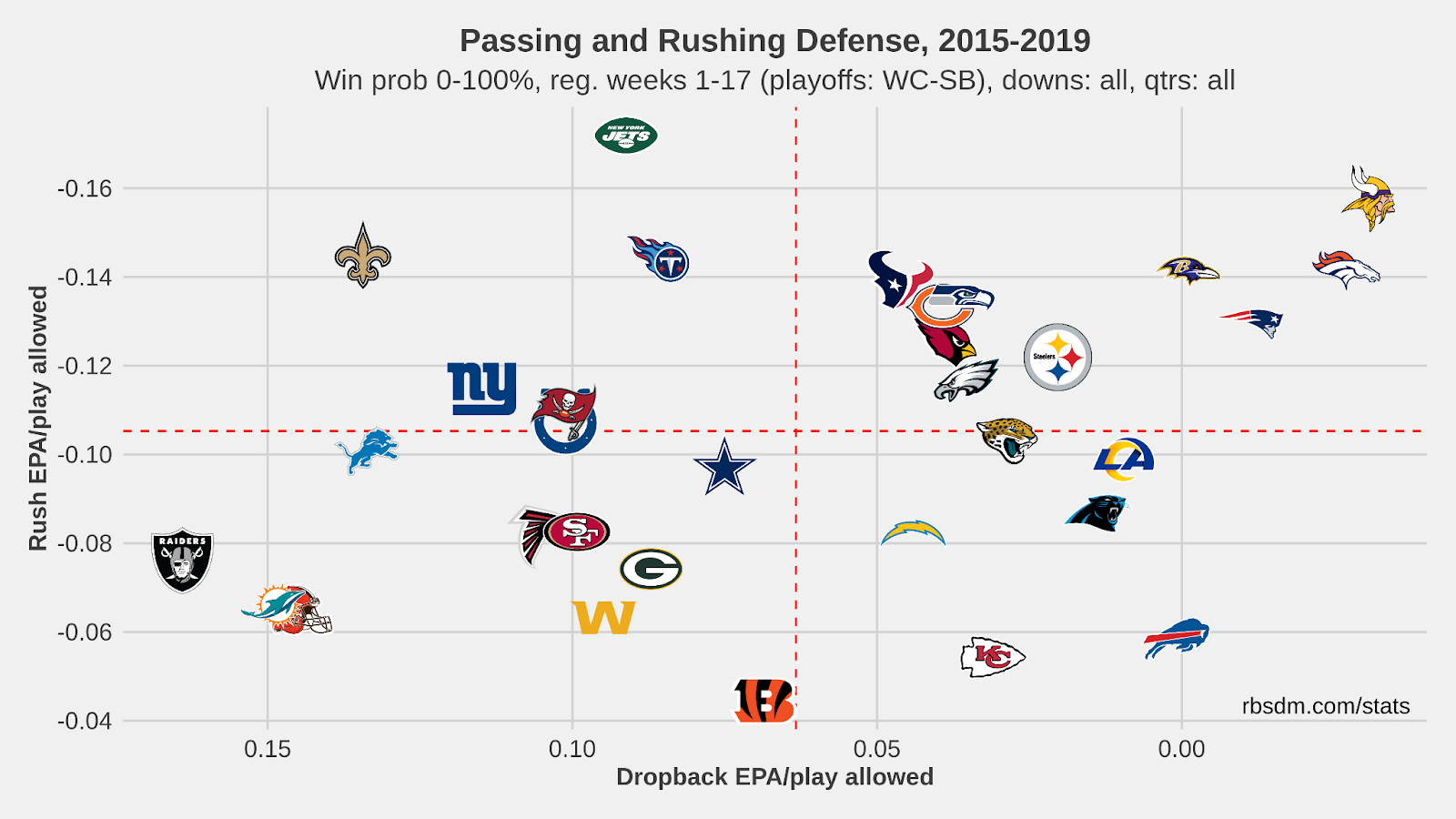 From 2015-19, the Zimmer defense was the best total defense across the league, with a -0.079 EPA/play. They were the best defense against the pass and second-best against the run. While they may not have been the best every year, they were among the top every season, and that consistency is what led them to this ranking.

However, if there is one thing the Vikings defense was the best at, and arguably what Zimmer is best known for, it was their play on 3rd-downs. The 2017 edition of the Zimmer defense was historically good at this, creating the NFL record of 25.2% of 3rd-down conversions allowed. It wasn’t just in 2017, however. Throughout the Zimmer regime, the Vikings have had the best 3rd-down defense on EPA/play. Even in 2020, where the Vikings defense finished in 29th for points allowed, they still finished top 10 in 3rd-down defense. Even with limited personnel and many of his usual players injured, Zimmer was still able to coach up a top 10 defense on third downs. However, if we look at the prime of the Zimmer defense, from 2015-19, we can see just how good the Vikings were. 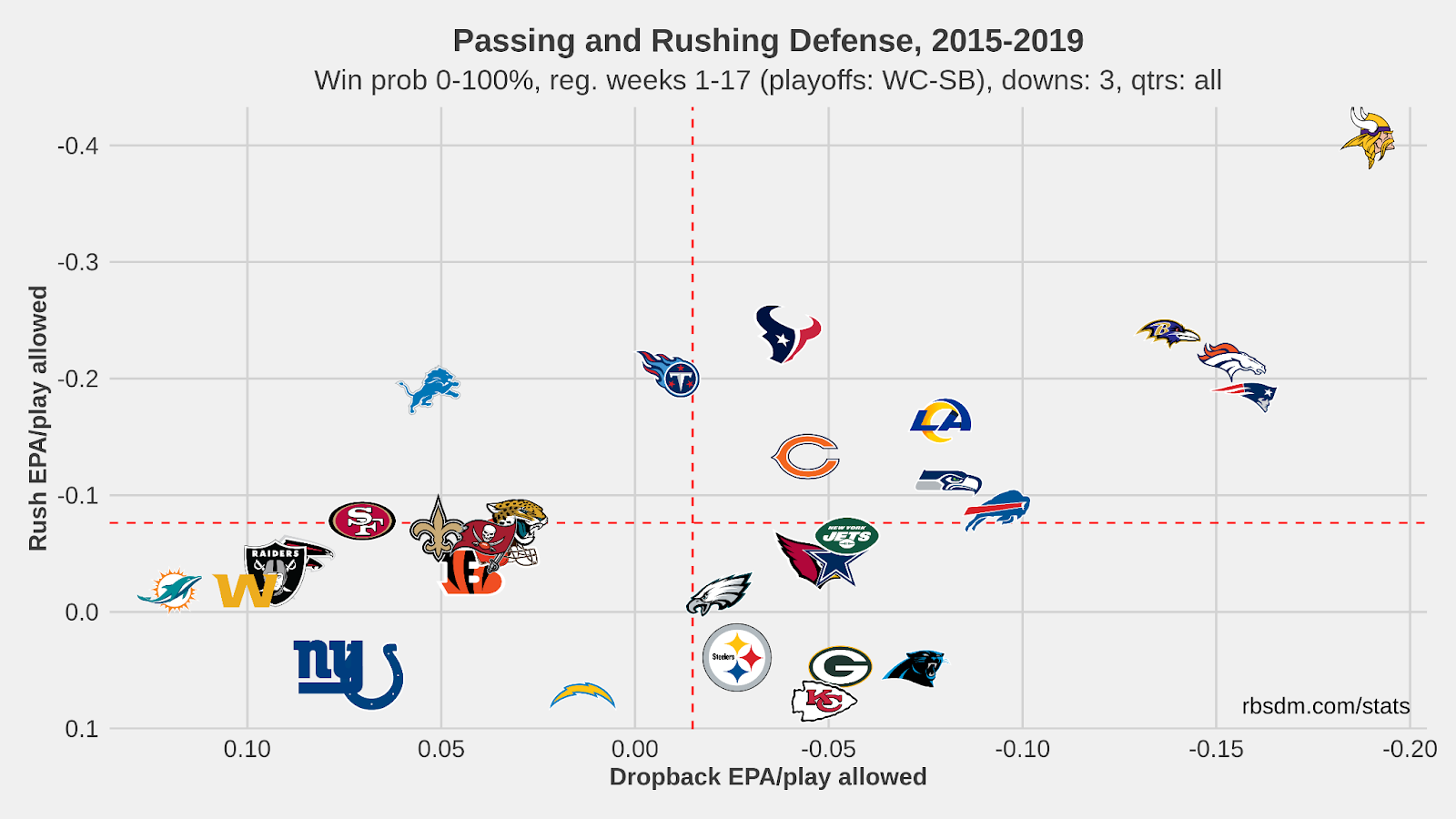 The Vikings were by far the best defense on third down, ranking the best both against the run and the pass. This trait of the Zimmer defense is a constant no matter who is on the field for him. They will be among the best in the league at stopping 3rd-down conversions. This is the kind of consistency Zimmer has shown throughout his career. Even going back to his days as the defensive coordinator for the Bengals, they still were 2nd in the league from 2008-13 in 3rd down EPA/play allowed. As long as Zimmer has talent on the defensive side of the ball, he has shown that he will consistently coach them to be one of the best defenses in the league.

The Vikings front office saw the product they placed on the field in 2020 and vowed to never witness that again. Early in free agency, they added defensive tackle Dalvin Tomlinson and cornerback Patrick Peterson. Since then, they have also added cornerback Mackenzie Alexander, safety Xavier Woods, and cornerback Bashaud Breeland. They will also return defensive tackle Michael Pierce, a 2020 free agent signing that was a covid opt-out. Finally, Anthony Barr, Eric Kendricks, and Danielle Hunter are all returning from injury. Harrison Smith and Cameron Dantzler were bright spots last season, and are also returning.

More importantly, however, the Vikings made sure to please Hunter. Hunter had back-to-back seasons with 14.5 sacks before missing the entirety of the 2020 season with a neck injury. It got reported during his time away from the team that he was unhappy with his contract. There were also rumors that Hunter would hold out until he got a new deal. Things seemed like they would head this way when he missed OTA’s earlier in June. However, before the start of mandatory minicamp, reports came out that Hunter was showing up. Later, we got the news that Hunter and the Vikings had agreed on a restructure of his contract.

The Vikings are not finished either. With the resolution of Hunter’s contract, more news along the defensive line came out.

With the signing of Sheldon Richardson, the 2021 defense will be a vast improvement. The Vikings addressed their greatest concerns in their secondary depth and the defensive line. While Tomlinson is one of the best run-stuffing defensive tackles in the league, he doesn’t have a ton of pass-rushing upside. And the defensive line last year struggled to create pressure on the quarterback. However, Richardson is known for his pass-rushing abilities and would have an immediate impact as a pass-rusher on this defense. With the return of Hunter, they have solved the majority of their issues from 2020.

We have seen the type of defense that Zimmer has put out throughout his coaching career when he has the talent. While 2020 was abysmal, the moves they have made since then have given Zimmer what he needs to be successful. He has the reputation of one of the best defensive minds, and 2021 should be back to the usual. With the veteran signings made, Zimmer now has players who have NFL experience. And, they should help out in the development of the young starters that were all over the defense last season. This unit should be back to the top of the league, which is the norm for Zimmer.

In Hunter, Smith, and Kendricks, the Vikings have a player at each level of the defense that has All-Pro talent. Patrick Peterson is one of the best cornerbacks to play the game. While he is past his prime, he should still be a high-caliber player for them. Cameron Dantzler finished 2020 as the 22nd best cornerback, per PFF, and should only improve from his rookie season. Anthony Barr and Sheldon Richardson have both been Pro-Bowl caliber players as well. There is talent all over the roster, and with this offseason, they have also added much-needed depth. Anything other than a return to being one of the best defenses in the league would only be a disappointment. With the caliber of coaching and talent they have, there are no excuses.