Justin Fields Gets All the Weird Narratives

This time last season, Justin Fields was the no-brainer number two quarterback in the draft behind Trevor Lawrence. He was coming off a season where he threw for 3273 yards, 41 touchdowns, with only three interceptions, and led Ohio State to the playoffs. He also had over 400 rushing yards with ten touchdowns and looked like the epitome of a dual-threat quarterback.

The Big 10 had originally canceled the 2020 season due to Covid-19 concerns, and it seemed he had all but locked himself up as the second-best quarterback in the draft. This status wasn’t enough for Fields, however. He was one of the most vocal proponents of the Big 10 having their season. Yet after another stellar season, capped off by his six-touchdown performance versus Clemson in the playoffs, his draft stock has dropped for some unfathomable season. However, every day it seems that there is a new reason for the hate, and it is getting comical. And the only conclusion from all of this is that the media hates Fields for no reason.

The most infamous example of a debunked narrative is the one that says Fields is a one-read quarterback. However, Benjamin Solak of The Draft Network recently debunked this here.

The biggest takeaway from that article is the whole narrative about only having seven throws past his first read is a myth. Yet these takes are still being thrown out by people who argue about Fields not being a top-three pick this year. The other narrative thrown around was the fact that he does not have the best work ethic. Over the last year, Fields was the greatest proponent for the Big 10 Season taking place and played through the college football playoffs with broken ribs. And somehow, he is the one who gets questioned about his work ethic and love for the game.

Dan Orlovsky is one person who faced criticisms for opinions on Fields that he shared on the Pat McAfee Show. The next day, Orlovsky followed it up by sharing the opinion of Fields’s coaches. Naturally, they all praised Fields’s work ethic and determination. Despite this, people continue to share fictional reasons for why Fields should not be drafted high. Just today, we got a new one by Chris Mortensen.

This reason to hate Fields as a prospect is absurd. There have been many other quarterbacks who have also played baseball and had success in the NFL. Kyler Murray is one of the most recent examples, as he got drafted in the first round of both the NFL and MLB drafts. Patrick Mahomes, Russell Wilson, and John Elway are just some other examples of successful NFL quarterbacks who played baseball and got drafted by MLB teams. It seems that with every passing day, there is yet another reason as to why people are low on Fields. Here is one more example of nonsensical talking points:

Unfortunately for Fields, this is not a new phenomenon. Black quarterbacks have had to deal with this kind of criticism in the pre-draft process. Most famously, Bill Polian publicly stated that he thought Lamar Jackson should have been a wide receiver in the NFL. This opinion is after he won the Heisman during his collegiate career as a quarterback. Black quarterbacks are routinely questioned on intelligence, questioned as leaders, or asked to play a different position. For Fields, this is as far from the truth as possible.

Yet, despite this revelation or the fact that he had a 3.9 GPA in high school, Fields football IQ routinely gets questioned, whether it is that he is a one-read quarterback, slow to pick up the playbook, or whatever new reason they come up with. This take is not new at all, and in fact, one that has been brought up a ton recently.

This problem will not be going away anytime soon, and unfortunately for Fields, it seems that it is unfairly hurting him in this pre-draft process. 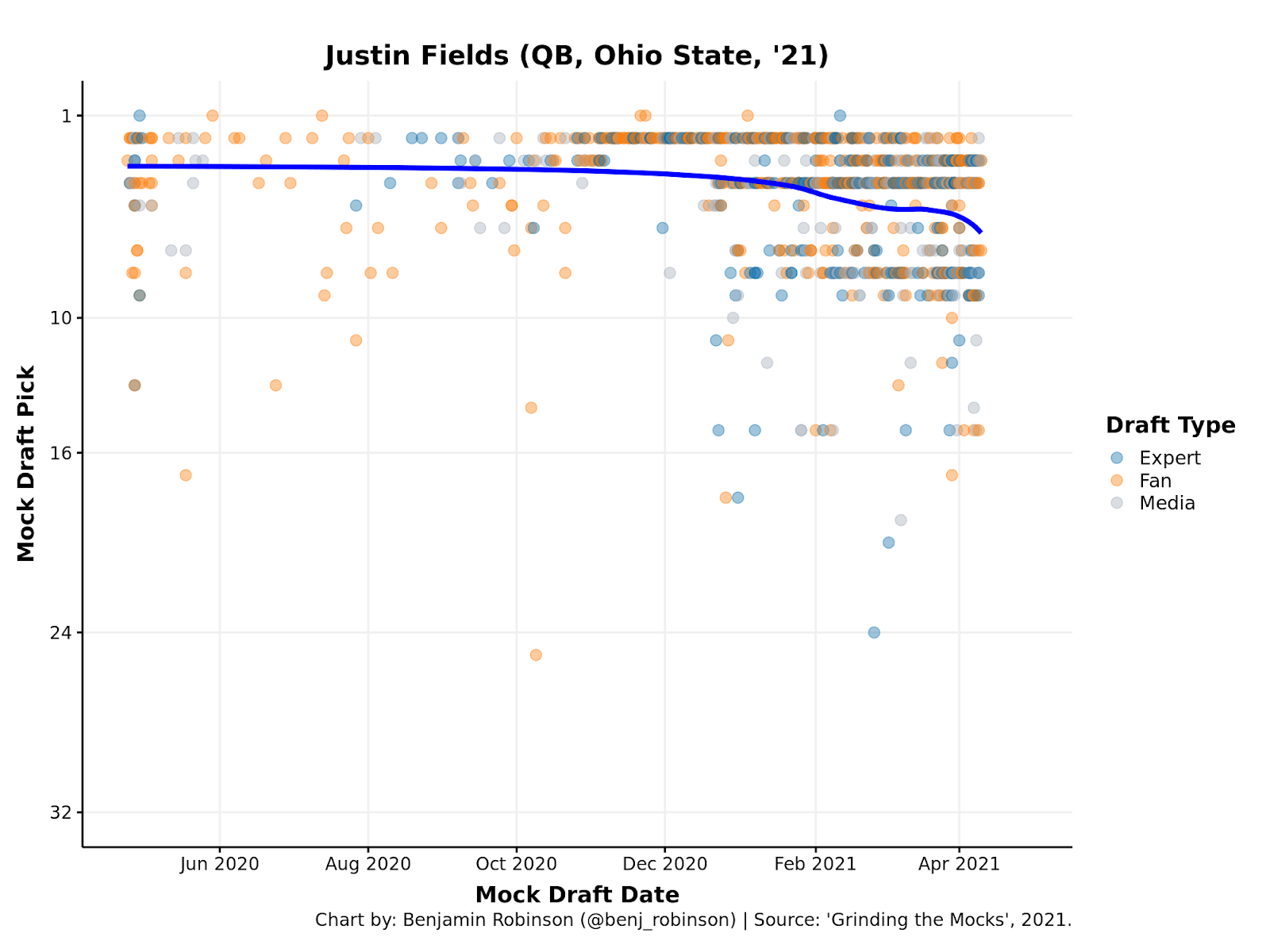 We can see from this chart, created by Grinding the Mocks, all these narratives about Fields have costed his draft stock at the worst possible moment for him. Despite being consistently seen as a top-three pick for most of the past year,  the constant disrespect Fields has gotten since the end of the college football season has hurt his status tremendously. Fields is now seen as someone who might go late in the top ten draft picks or fall out of the top ten entirely. However, for quarterback-needy teams that do not have a high draft pick, this is a blessing in disguise. Teams may be able to capitalize on Fields’s sudden dropping and find themselves the steal of the first round. The draft is a bit over two weeks away, and we can only hope that Fields gets the proper respect.