2021 will be a critical year for the future of the New York Giants. Former 6th overall pick Daniel Jones will have to show that he is indeed the future of this franchise. The Giants seem to know this and have done their best to surround him with talented skill position players. In free agency, they have added wide receiver Kenny Golladay and tight end Kyle Rudolph to an offense that already included Sterling Shepard, Saquon Barkley, Evan Engram, and Darius Slayton. The Giants have also been investing heavily into their offensive line over the last couple of seasons, with mixed results. Daniel Jones is running out of excuses and must show that he is a franchise guy this season, or else the Giants will have a difficult question to answer next offseason.

The Giants had one of the better defenses in 2020, only giving up 22.3 points per game. This was capped off by a week 13 win over the Seatle Seahawks, in which they held Russell Wilson to only 10 points scored. This offseason, the Giants have done well to make sure that this remains the case. They signed cornerback Adoree Jackson to complement James Bradberry and extended star defensive lineman Leonard Williams. While they lost Dalvin Tomlinson in free agency, they signed Ifaedi Odenigbo for more defensive line depth. This defense should produce similarly with these signings, which turns the attention to the offense.

While the defense was excellent, the offense was borderline pitiful last season. The Giants averaged 17.5 points per game, which was only above the Jets. While they did lose star running back Saquon Barkley, it was the passing game that was dreadful to watch. Daniel Jones only threw 11 touchdowns in 14 games, including a four-game stretch where he had zero passing touchdowns and three interceptions. The Giants saw this and aggressively attacked receiving options in free agency by adding Kenny Golladay and Kyle Rudolph. With Saquon and his pass-catching abilities returning in 2021, the Giants’ passing attack should look much better.

The Giants, however, will need much-improved play from their offensive line. Despite drafting Andrew Thomas, Will Hernandez, and Matt Peart in the first three rounds since 2018 and giving Nate Solder a large contract in 2018, the Giants still finished as the second-worst offensive line per PFF. With Solder returning in 2021, and Thomas gaining more experience, there is optimism that there could be an improvement. However, the Giants’ problems are on the interior of the offensive line. Center Nick Gates ranked as the 27th best center according to PFF, out of 36, and Shane Lemieux was the worst-ranked guard in the league with a 32.2 PFF grade. The Giants will have to address this in the latter stages of free agency, as well as the draft if they want to get the best results possible for their team.

2021 will be Daniel Jones’s final audition to be the face of the Giants. If he cannot show significant improvement, the Giants will have a hard decision to make in 2022. Over the last few years, we have been able to tell if a quarterback is good quickly. Kyler Murray, Lamar Jackson, Patrick Mahomes, Jared Goff, Carson Wentz, Dak Prescott, Josh Allen, and Baker Mayfield are examples of quarterbacks who have shown promise or led their teams to a playoff berth within their first two seasons as starters. In 2020, rookie Justin Herbert showed that he had the traits to be the Chargers quarterback of the future. Time is running out for Jones, and this should be his final chance to prove himself.

Jones did show improvement in 2020, but not enough to justify himself as the Giants’ long-term starter. Per PFF, he had a 78.4 rating, which was an improvement over the 65.3 he posted in his rookie season. However, this was only good enough to be the 18th best quarterback in 2020. There is something that we can be excited about, however, when looking at Jones. 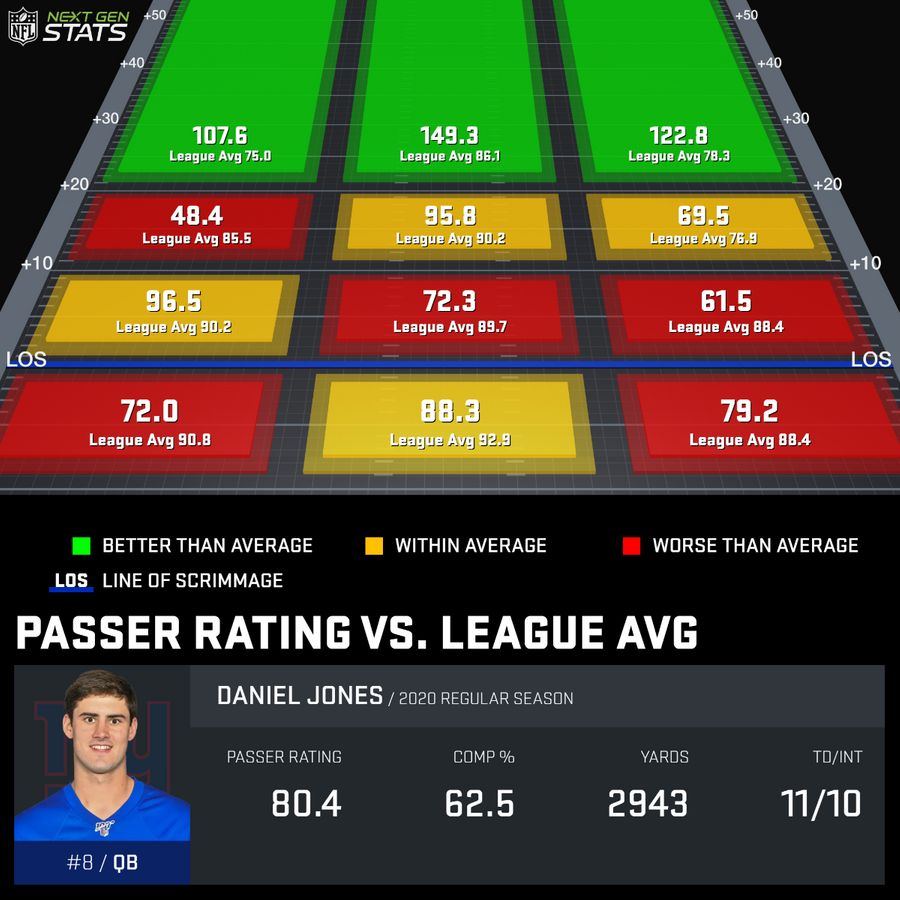 Per Next Gen Stats, he was an excellent deep-ball passer in 2020. This observation is a good sign for him, as long as he becomes more consistent on shorter throws. With the additions the Giants made in free agency, Jones may make the final leap to being a top ten quarterback and solidify himself as the Giants’ future. The expectations for this season are to make the playoffs for the first time since the 2016 season. For this to happen, Jones will have to up his game, and for now, the only thing we can do is wait and see how he plays next season.