This time last season Christian McCaffrey was the clear choice if you had the first overall pick in your fantasy leagues. He was coming off a 2019 season where he produced a league-winning 471.2 fantasy points in PPR leagues. The next best running back that season was Aaron Jones who had 314.8. Alvin Kamara finished as the RB1 in 2020, with 377.7 points, which was nearly 100 below McCaffrey’s 2019. However, in 2020 McCaffrey was limited to only three games due to injury, and as a result, there’s more debate this year about who the best fantasy running back is. If anything is clear though, McCaffrey should still be the first running back taken off the board in 2021.

The first thing that needs to be talked about is McCaffrey’s injury in 2019. He suffered a high ankle sprain in week two, which ended up costing him the next six weeks. He returned in week nine, but then missed the rest of the season with a quad injury. With the Panthers’ season over by December, they decided to shut down McCaffrey for the rest of the season, giving him the most time to return from his injury and be ready in 2021.

The reality is, most of the running backs in the conversation for being drafted first overall have injury concerns. Dalvin Cook has yet to play a full 16 game season, Kamara hasn’t played a full 16 games since his rookie year, and Saquon Barkley is coming off back-to-back injury-plagued years. Derrick Henry is the safest choice, but in PPR formats, he doesn’t have the receiving upside that the other running backs at the top have. We can’t predict injuries, and as such, we shouldn’t be avoiding a player just because they had one injury-plagued season. 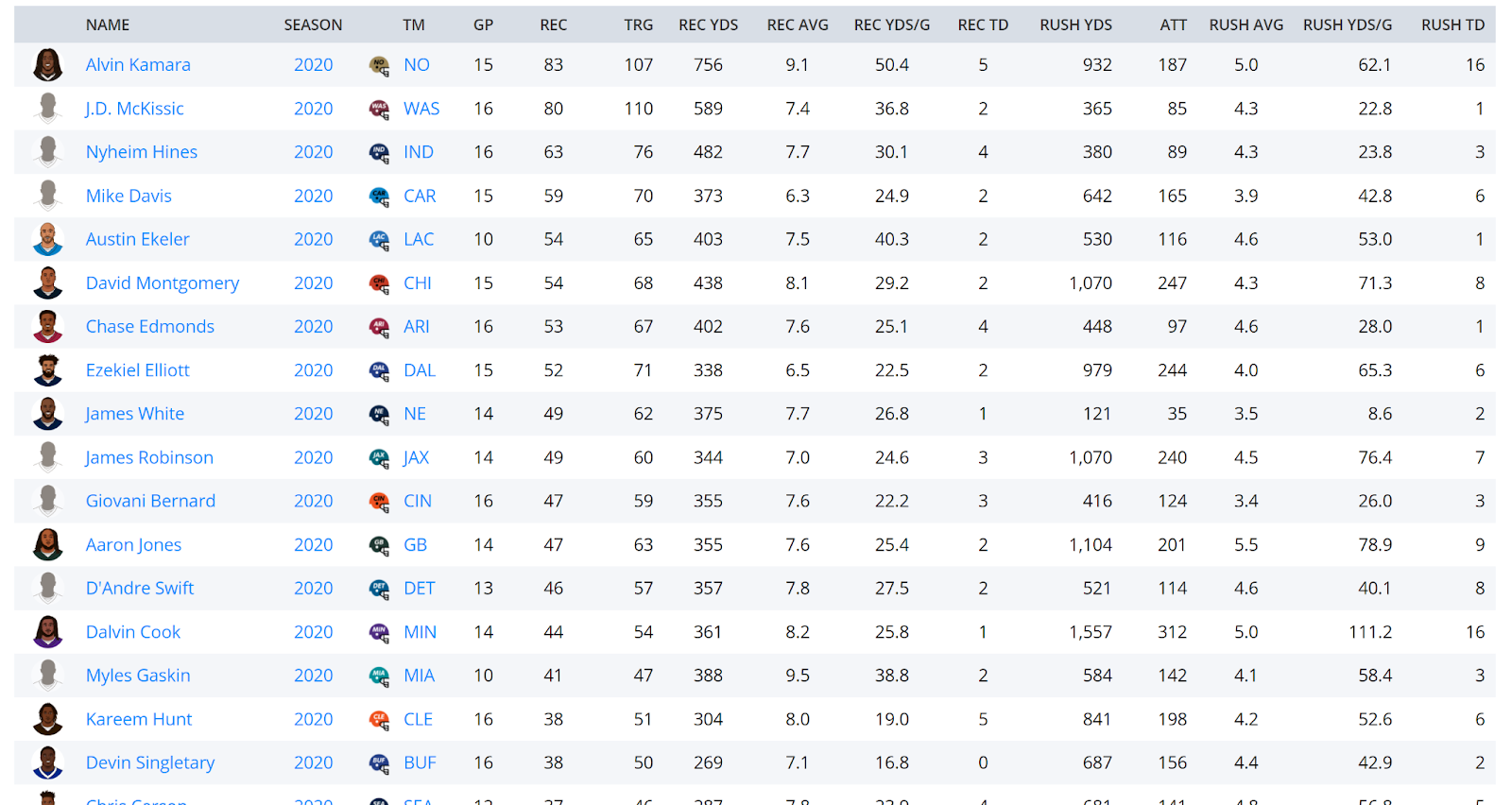 For PPR formats you want running backs who get the enormous reception totals, along with the rushing production, and McCaffrey gives you elite production in both areas. The Panthers’ offense has run through McCaffrey every game he’s started the last three seasons, and there is no sign of that changing in 2021.

The last time we saw McCaffrey play a full season he had one of the best fantasy seasons of all time for a running back. Only Ladanian Tomlinson in 2006 scored more fantasy points than McCaffrey did in 2019, with 481.6. That year, Tomlinson won the NFL MVP award. McCaffrey in 2018 still put up a top ten fantasy season of all time with 385.5. McCaffrey showed no signs of slowing down in 2020 either. Despite playing in only three games, he averaged 30.1 fantasy points per game. That was a higher total than his 29.4 points per game in 2019. What we’ve seen from McCaffrey the last three seasons is the best fantasy running back in the league right now, and as long as he’s healthy there is no evidence of that changing.

We’ve also seen what running backs can do in a Joe Brady offense. Despite McCaffrey missing most of the season, the Panthers still had over 100 targets to running backs in 2020. Mike Davis finished the season as the RB12 in fantasy with much worse efficiency than McCaffrey. With the Panthers drafting Chubba Howard, we may not see 2019 levels of production from McCaffrey, but even if he regresses towards his 2018 totals, that would still be one of the top running back totals in 2021.

In 2019, he was the Panthers’ main redzone rushing threat, leading the league with 80.6% of their redzone rushing attempts. All five of McCaffrey’s rushing touchdowns in 2020 came from redzone carries as well. Combine this with his rushing and receiving volume, McCaffrey should have no problems finishing as the number one fantasy running back if he’s healthy in 2021. And it still isn’t much of a debate.