Beware of the Jets

Seriously. The New York Jets have the pieces to make themselves into a competitive team within the next couple of seasons. After trading away Sam Darnold, the Jets have all but locked in on a quarterback at the number two pick of this draft. GM Joe Douglas has done a great job stacking up assets over the last couple of seasons, that the Jets are only a couple of pieces away from being contenders in the AFC. For a team that only won two games in 2020, this sounds like a bold take. However, the Jets were not the least talented team in the league last year. They have plenty of talent, which got masked by poor coaching. With a new coaching staff and an accumulation of early-round draft picks, the Jets are ready to have their talent showcased.

Over the last couple of years, general manager Joe Douglas has been stocking up on draft picks for this very moment. By trading away Jamal Adams and Sam Darnold, the Jets can quickly fill out their roster with premium draft picks over the next couple of years. This team is also very young. Marcus Maye is the oldest draft pick on the team, and he got drafted in 2017. The only projected starters over the age of 30 are right guard Greg Van Roten, cornerback Lemarcus Joyner, and defensive end Vinny Curry. As we add in the incoming draft picks over the next two years, this will be a young team, ready to build around the rookie quarterback the Jets will select with the number two overall pick this year.

We have only seen one draft from Joe Douglas, but it is enough to give optimism that he can hit on the premium draft picks over the next few years. In 2020, Douglas drafted stud left tackle Mekhi Becton, talented receiver Denzel Mims, and cornerback Bryce Hall. All these players looked like future starters last season and should only get better with more experience. There is also hope that third-round picks Ashtyn Davis and Jabari Zuniga improve after not great rookie seasons. The Jets hitting on their first and second-round picks in 2021 and 2022 should be the final pieces to this roster, especially as it is all but confirmed that they are taking quarterback Zach Wilson with the second overall pick this year.

The hiring of Robert Saleh as the new head coach means the Jets are ready to build around their talented defense. Saleh was the mastermind behind the San Fransico 49ers defense that carried them to a Superbowl appearance in 2019. Despite having tons of injuries in 2020, Saleh still coached up their defense to be above average. The Jets may not be as talented as the 49ers, but there is still a lot to be excited about. 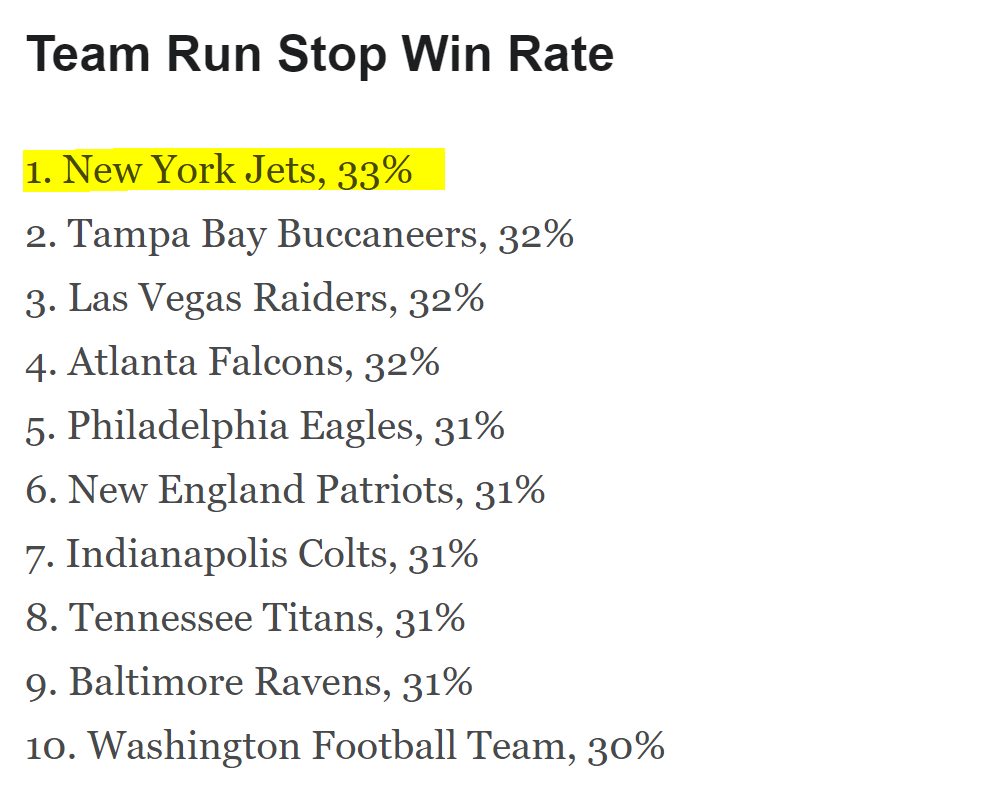 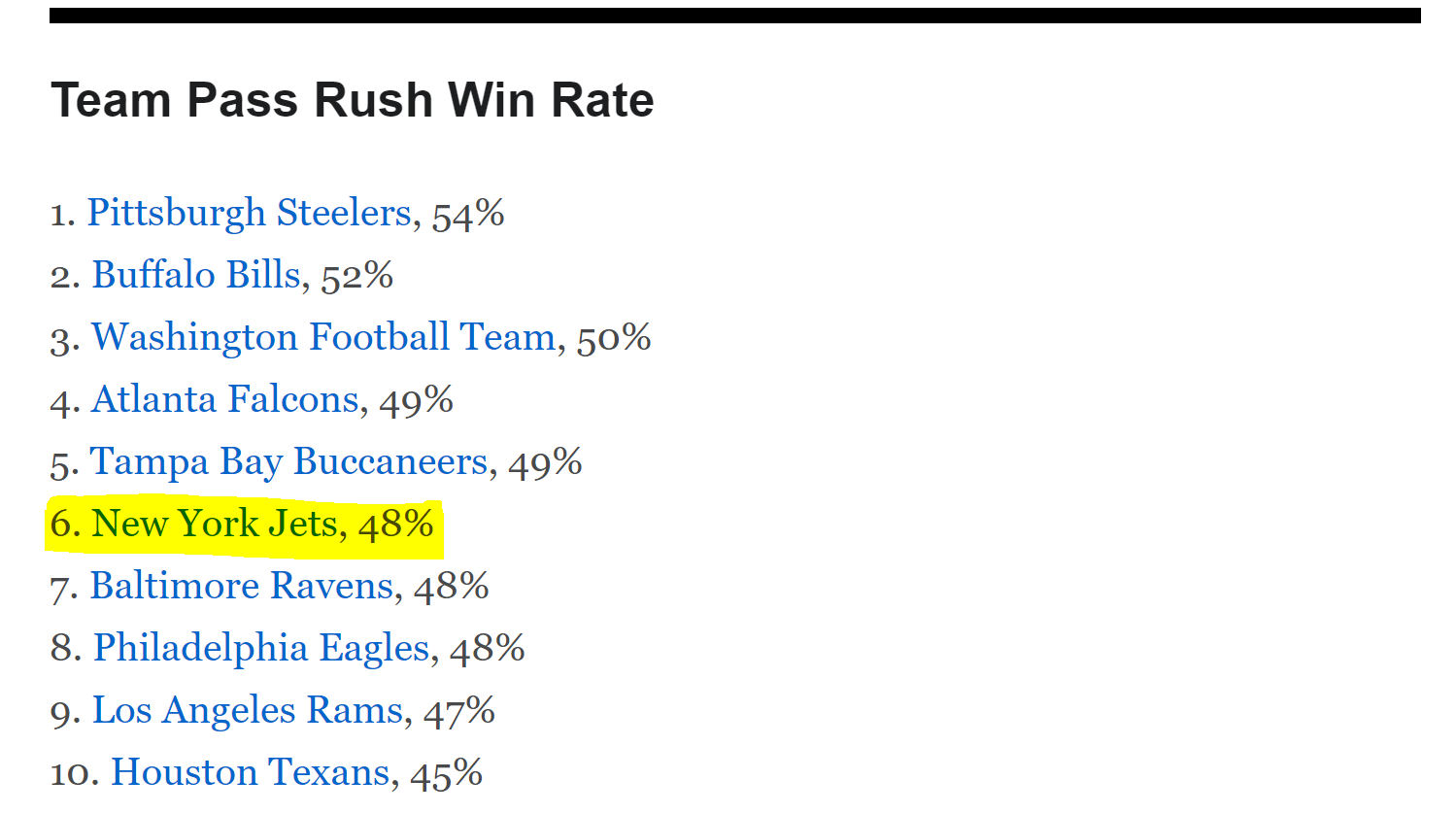 We can first take a look at the defensive line. The 2019 49ers had a devastating pass rush, with players like Nick Bosa, Deforest Buckner, Arik Armstead, and Dee Ford terrorizing opposing quarterbacks. The Jets have a foundation for something similar. Despite mostly getting pressure from the interior of the defensive line, the Jets still ranked sixth in the NFL in Pass Rush Win Rate. Quinnen Williams was ranked 4th among defensive tackles in pass rush win rate, with John Franklin-Meyers finishing in the top 15. The Jets also ranked first in Run Stop Win Rate, with both Quinnen Williams and Folorunso Fatukasi both finishing in the top five. With the addition of Carl Lawson as an outside edge rusher, and likely a draft pick, this is a defensive line that will be extremely talented.

The Jets also have talented players behind their front four. Safety Marcus Maye was ranked 5th out of all safeties per PFF last season. Bryce Hall showed promise as a rookie, but the cornerback room will need to get addressed over the upcoming drafts. CJ Mosely will also return at linebacker after he opted out of the 2020 season due to Covid concerns. If the Jets can hit on draft picks in the secondary, this is a defense that’s ready to induce pain onto the league.

The Jets failed Sam Darnold by not surrounding him with talent. Under Joe Douglas and Robert Saleh, this shouldn’t be the case. However, the offense does have more work that needs to get done than the defense. Denzel Mims showed promise last season and should be capable of taking over the #1 receiver role. Corey Davis was signed in free agency and is coming off a good 2020 season, while Jamison Crowder and Keelan Cole give the receiving room solid depth. The Jets also seemingly found their franchise left tackle last season, with Mekhi Becton. The Jets have some work to do on the interior of the offensive line, but this is a very deep offensive line draft class, so the Jets should be able to improve.

The only other major needs the Jets have are at running back and tight end. Frank Gore seems ageless, but he shouldn’t be the lead running back for this team again. Chris Herndon showed promise his rookie season, but it’s looking like it’s time to find someone else to be their tight end. However, this team already has three options at receiver, and assuming they find a running back in the draft, they will have enough receiving options, so that tight end shouldn’t be the greatest need. The Jets are ready to surround their rookie quarterback with plenty of talent, and in doing so, will put themselves in the best situation to contend.

This rebuild won’t be simple for the Jets. They will have to hit on their quarterback pick in the upcoming draft, or nothing else will have mattered. They also will likely not be able to fix all of their needs in just a draft, which is why the extra early-round picks in 2022 are of vital importance. However, Joe Douglas so far has put this team in the best situation to rebuild, and if all goes to plan, this is a team that can be dangerous as early as 2022.

Seriously. The New York Jets have the pieces to make themselves into a competitive team within the next couple of seasons. After trading away Sam Darnold, the Jets have all but locked in on a quarterback at the number two pick of this draft. GM Joe Douglas has done a great job stacking up assets over the last couple of seasons, that the Jets are really only a couple of pieces away from being contenders in the AFC.