After a lackluster performance in the divisional round, the Baltimore Ravens’ attention has entirely shifted to the offseason. With two early-round playoff exits, one thing has been explicit: Lamar Jackson needs help. In their last two playoff losses, the offense has put up a combined fifteen points, yeah that’s not going to win you a lot of games. No matter how much Lamar can create plays with his feet, he will eventually need a reliable supporting cast to get over the hump. With just under $20 million and a QB still on his rookie deal, look for the Ravens to be active players come time of free agency. With that, let’s dive into their five biggest needs this upcoming offseason with possible targets.

Despite fielding a top defensive unit last year, a corner (or safety) is on their list of needs heading into the offseason. Even with having two top 10 corners in Marlon Humphrey and Marcus Peters, adding a legitimate third corner or safety takes their defense to the next level. And besides, you can never have too much corner depth. With the defensive line also set to take a significant hit, adding an additional corner or safety could prove valuable if the pass rush cannot hit home. The Ravens could look to a veteran free agent to fill this need, perhaps Malik Hooker. Hooker tore his Achilles near the beginning of the season, making him a potential bargain at the position. His range as a free safety could ultimately allow the Ravens to play more single-high looks. Given his ability and relatively young age, this could be a low-risk, high reward situation for the Ravens. 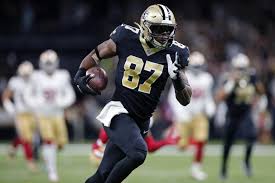 When you put up three points in a playoff game, chances are your offense will need some improvements. Even with having Mark Andrews on the roster, the Ravens would be wise to add an athletic tight end to stretch the middle of the field and provide Lamar another weapon. A player like Jared Cook would be a good fit; he would add a veteran presence to the group with his experience. At 6’5 and a forty time of 4.49, Cook undoubtedly has the athleticism to stretch the field. Kyle Rudolph could also be a guy to watch. What he might lack in athleticism, he makes up for with his hands and red-zone ability (two critical traits that could speed along the development of Lamar’s passing game). 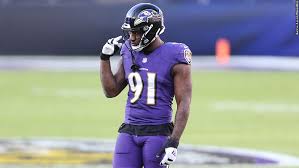 Even with fielding a top defensive unit, the Ravens only ranked 14th in total sacks. Given Yannick Ngakoue, Matt Judon, Derek Wolfe, Jihad Ward, and Pernell McPhee all set to enter free agency, the Raven defensive line will take a major hit. Ngakoue and Judon will most likely command top dollar on the open market and might be too rich for the Ravens’ cap. However, when you trade a third-round pick midseason, it seems unlikely you only keep that player for half a season. Even though Ngakoue didn’t have the production fans were hoping for, his scheme fit and ability to be a stand-up rusher make him a more likely candidate for an extension. Also, look for the Ravens to bring back Wolfe and Ward for added depth. While the Ravens could undoubtedly look to free agency, expect them to take multiple shots in the draft to replenish this need. It is clear the Ravens value versatility on the edge position. Kwity Paye would be an ideal fit given his hybrid build, but it seems unlikely he makes it past twenty. Gregory Rousseau is another fit at the end of the first round. His raw athleticism would provide another weapon to Don Martindale’s arsenal. Rashad Weaver is another name to watch in the second round. The tallest prospect on the list at 6’5 and 270 pounds, Weaver possesses excellent ability against the run and pass.

Yup! The Ravens’ biggest need is so significant it requires two spots on the list. When your leading receiver, Marquise Brown, only has 769 yards, you know your receiving corps is in trouble. More importantly, they need to find a true WR1 to accelerate Lamar’s development as a passer. After finding a true WR1, they should add a receiver that can extend the sticks and win with his route running ability. Doing so would allow Brown to transition to a dynamic and vertical threat role. Adding a WR1 should be the ultimate goal no matter the cost, contingent on Jackson’s growth. His development would be priceless given the long-term impact it could have on the franchise. With Allen Robinson being franchise-tagged, the Ravens should look to add Kenny Golladay. His ability to make contested catches and route-running ability would make for the perfect WR1. From there, they could take a shot at Keelan Cole or Curtis Samuel. Both relatively young players appear to just be scratching the surface as players. The Ravens could also target Rashod Bateman in the first round of the draft. Bateman has drawn comparisons to Allen Robinson and could be a fit in their offense. However, it might be tough to count on a rookie to come in and contribute right away as a WR1. All in all, expect the Ravens to take many shots at adding weapons. Don’t be surprised if they are willing to break the bank to get their guy either.